This afternoon, my dear wife, Kay, posted the following on Facebook–presumably about me.

My husband does stuff like messaging ‘on way home’ or ‘leaving now’, and then I’ll see he’s still there minutes and sometimes even hour later. #SlaveToSavingTheWorld

So I thought I’d share with you my reply, which I have since edited a touch here and there, because I’m cool like that.

END_OF_DOCUMENT_TOKEN_TO_BE_REPLACED

I want to share what my dear wife, Kay, posted on Facebook this morning, and my further response to it (the sharing here of which is her idea—ostensibly in the interests of posterity.)

Considering “identity”. With which ancestry is one to identify? Am I my European invaders? or my Cherokee victims? Do I have to identify with all Europeans that came to America, or may I identify with my particular Europeans that, as far as I know, came here and settled and farmed unoccupied land. As far as I know, I don’t have any conquistadors nor even any revolutionaries in my ancestry. Pretty boring, I guess.

And now, my reply:

You have excellently highlighted the arbitrariness of picking and choosing that with which one will “identify” regarding his or her ancestors.

I think it says a great deal about us, what traits we choose. Suppose we take a shine to the violence of one, or to the brilliance of another—or to the plight of the one, or the dominance of another.

It’s also pretty interesting that anyone should feel compelled to identify with an ancestor as opposed to identifying with anyone ELSE that they never met. Hmmm. It is indeed an arbitrary practice, and far from a rational exercise.

Peter Pelham brought the first pipe organ (so I have read) to the New World. Shall I revel in that, and insist that it has relevance in the fact that I am also an ̶o̶r̶g̶a̶n̶i̶s̶t̶ singer? Alternately, some of the Pelhams were brought to the New World to be residents in the penal colony of Georgia. Shall I then “identify” with them regarding my avocation as a proponent of ̶t̶h̶e̶ ̶l̶i̶f̶e̶ ̶o̶f̶ ̶c̶r̶i̶m̶e̶ the rule of law?

John Pelham, on the other hand, was a mighty-fine cannoneer in the War for Southern Independence. He was killed in action, posthumously promoted from Major to Colonel, and honored by having a city named for him in 23 states–including some in that region that fought against him. And his strategy (now called “Shoot and Scoot”) is still studied at West Point to this very day. I identify strongly with him, based on his love for peanut butter and banana sandwiches—which fact, although not supported by any extant account of his preferences, is firmly established in my mind on the unassailable basis that he being so good a strategist, he simply MUST have loved peanut butter and banana sandwiches.

That’s all I have to say about that. 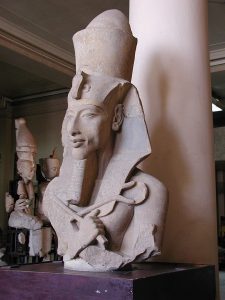 On further discussion, I decided that the best way to celebrate the abritariness of it all would be for us each to take a year to “identify” with someone else’s ancestors! Starting today, therefore, I am now identifying with the Egyptians–and more specifically, with Amhenhotep IV, affectionately known to those of us in his family as Akhenaten, and to King Tut, of course, as Uncle Dad.

Pa Akhenaten, as I like to call him, really shook things up, moving the capitol city 11 miles down the Nile and making significant changes to their religious practices.  After his death, his reforms were promptly eradicated and his new palace and temple torn down and their stones used to build cisterns and bathrooms and such.  It’s this last part in particular that I choose to identify with.  I’m not sure how, exactly, but I’ll think of  away.  After all, I have a year to work on it!

What follows is a brief description of my Leaf Cloud Theory of Trees.

Perhaps through some sinister government conspiracy, or perhaps only through commonplace institutional dullness, schools in America have taught students for many generations that trees come about through deposition of seeds (such as acorns or pine cones) into suitable soil.  The seeds, it is said, then sprout and grow into (sometimes quite large) trees, which, of course, yield canopies of leaves.

New evidence, however, suggests that this model may be inaccurate.  Without getting bogged down in details and proofs, the intent of this brief article is simply to present the basics of the Leaf Cloud Theory.

Nearly everyone has stopped at some point to admire a tree, but very few actually understand how trees get there in the first place.  To complicate matters, as fewer and fewer people spend time outdoors in each successive generation, long-understood phenomena become more scarcely understood until what remains is mistakenly considered to be mere fable.  Perhaps there is no better example of this than the leaf cloud.

Living leaves, because they are strongly social beings, tend to form themselves into societies numbering from just a few to a few hundred thousand.  In such numbers, and under the right conditions, electromagnetic anomalies occur and leaves in societies of sufficient size will levitate in cloud-like formations.  Hence, the name “leaf cloud”.  (See artist’s rendition above.)  The greater the number of leaves, the higher the levitation, as a general rule.  Most single leaves, especially when they are brown, are unable to levitate, while green leaf groupings of as few as two to four have sometimes been witnessed to levitate within mere centimeters of the ground.  Larger leaf clouds are rarely witnessed to levitate more than a few hundred feet above the ground.

The Need for Water

Leaves in such cloud societies are still limited by their need for water.  Once the society has decided on a promising location (such decision is believed to be by popular vote), its separate leaves begin to emit single, twig-like appendages, one per leaf.  These join together, attaching the various leaves together and growing in length, in search of similar appendages from other groupings of leaves within the cloud.

The effect of this corporate joining together is that the appendages nearer the earth are considerably thicker, as if by some additive effect.  They dangle downward as they continue to grow and join together.

Once all the leaves have integrated themselves into the collective, the water channels so formed will join themselves into a single “trunk” line reaching ever closer to the ground.

At this point, the forming trunk line begins to form a crusty outer layer (commonly referred to as “bark”) in order to protect the interior water lines from evaporation.

The amount of energy expended by the leaf cloud to form a trunk line sufficient to reach the ground is considerable.  It is believed that this is the reason that leaf clouds of lesser population remain low to the ground, while tall trunk lines are only ever formed by large leaf clouds—those having sufficient energy for it.  Once the trunk line has reached half way to the ground, the individual leaves are short on energy and are in danger of death should any complications occur.

The process of grounding with a suitable trunk line moves very quickly, and this is crucial for the survival of the leaf cloud.  In their energy-starved state, normal occurrences such as full sunlight can prove deadly.   This is why it is believed that almost all leaf cloud trunk line installations occur at night, as it not only minimizes the threat of death from exhaustion of the weaker leaves in the cloud, but also tends to hide the installation from more particular species who may object to a trunk line being installed in any given location.

Well, that’s enough detail for now.  You’ll likely have questions, but you know how to reach me.  In the meantime, I’ll be busy overturning all the world’s ignorance and scientific hogwash.

Here’s one of the best Shakespeare quotations ever!  And my, how it applies to our modern hearsay/Facebook culture!

“Merrily posteth the Fool, yet vetteth not, that which he wast but told I had said.”
Shakespeare
~ Twelfth Night, Act II, Scene 1

Ralph:  You know, they say that Brother Billy is really popular.  He has preached over a thousand funerals in this county!

Dale:  That guy’s not really that popular; I think his reputation comes mostly from poor communication. END_OF_DOCUMENT_TOKEN_TO_BE_REPLACED NEVADA DESERT, 9 June 2013 –Leaving his exhausted family in the safety of the broken-down car, former Navy SEAL Brian Schad humps it across the desert at sundown, certain that he can be back with a warm McDonald’s breakfast for everyone by first light. The nearest town is only 31 klicks out and Schad figures that while he would normally make that run in only two hours, he’ll have to slow down on the return trip to keep from sloshing the coffee. When asked why he didn’t do what any normal SEAL would do and simply push the lifeless vehicle into town with his family steering safely from inside, Schad replied that he had thought of that, but was concerned about exceeding the speed limit.OohRah!

As I aspire to be a deep and rational tinker, willing to call into question even the most deeply entrenched tenets of common human wisdom, I find that my thoughts are not always limited to the more traditional topics of public discussion.  No, this post is not about politics nor religion nor even the psychology of rational thinking (OK, maybe it’s going to turn out to have something to do with that, after all, as most of my posts do–but let’s pretend I hadn’t brought that up so as not to derail my introduction.) END_OF_DOCUMENT_TOKEN_TO_BE_REPLACED

I observe that a properly-folded fitted should should approximate the shape of a basketball.

Note:  These three are ready favorites of mine.  I heard them years ago from various sources.

Once upon a time, a snail decided to go for a ride on the back of a turtle.  Do you know what the snail said?  (See answer in red at the bottom of this page.) END_OF_DOCUMENT_TOKEN_TO_BE_REPLACED

NOTE:  I heard this story years ago and thought it was hilarious, even though I don’t drink beer.

The CEOs of all the major beer companies were at dinner one night at their annual Beer Makers’ Convention. The waiter comes out and asks, “May I get you gentlemen started with something to drink before I take your meal orders?” END_OF_DOCUMENT_TOKEN_TO_BE_REPLACED